County Offices are closed on January 31 due to anticipated weather conditions.

County Offices are closed on January 31 due to anticipated weather conditions. 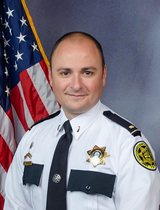 Commonly referred to simply as Sheriff’s Patrol, the Patrol section is the first line of law and order in Montgomery County and is responsible for enforcing the laws of the State of Tennessee. The activities of the Patrol section are dependent upon the number and types of calls for service, but the primary objective of the Sheriff’s Patrol is to protect life and property and to preserve public order.

In order to accomplish their primary objective, the Sheriff’s Patrol operates on the highways, streets, and roads of Montgomery County, providing intervention for crimes that are in progress, responding to crimes that have already occurred, and interdicting traffic offenses by making traffic stops and issuing citations. Other functions of the Patrol section include assisting stranded motorists, transporting persons to shelters or mental institutions, and locating lost or missing individuals.

The K-9 Unit supports the operations of the Patrol section, other specialized units within the Sheriff’s Office, and other agencies. Typically, canine teams are used to search buildings, track persons, apprehend criminal suspects, locate evidence or contraband, and to assist in control and in locating missing persons. A team of volunteers make up the K-9 Search and Rescue Team, which is often visible at community events and may be activated to the support the operations during periods of widespread activity. The unit is led by a Sergeant.

The Traffic Enforcement Unit is a specialized unit that focuses on the traffic-related responsibilities of the Patrol section. In addition to saturation patrol, the Traffic Enforcement Unit also utilizes the Radar Trailer to clock speeds on county roads. The unit also coordinates sobriety checkpoints at various times throughout the year, especially during holidays. Beyond the enforcement of traffic laws, the unit is also active in education for the community on the importance of safety belts and child safety seats. The unit is led by a Sergeant.