On 3 December 1835 the Tennessee General Assembly passed an act to provide for the laying off of the several counties into civil districts of convenient size under which Justices of the Peace and Constables should be elected.

James Reasons, William Trotter, and Armstead Rogers were appointed commissioners to accomplish the districting for Montgomery County. On 8 March 1836, they recorded the results of their labors in Will Book G, pages 258-263.

A copy of their plat appears below, together with annotations derived from the accompanying plat narrative. The district number and polling places are located, as well as the large water courses, roads, and towns. Residences named in the plat narrative are located. District 11 and about one half of District 9 became part of Cheatham County in 1856. The map was annotated by Cleo G. Hogan and prepared by Hayden Tenpenny. 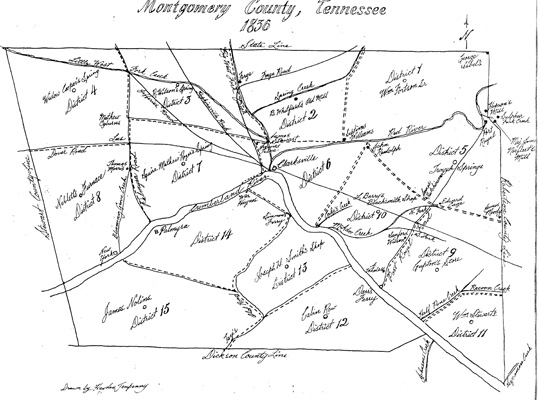